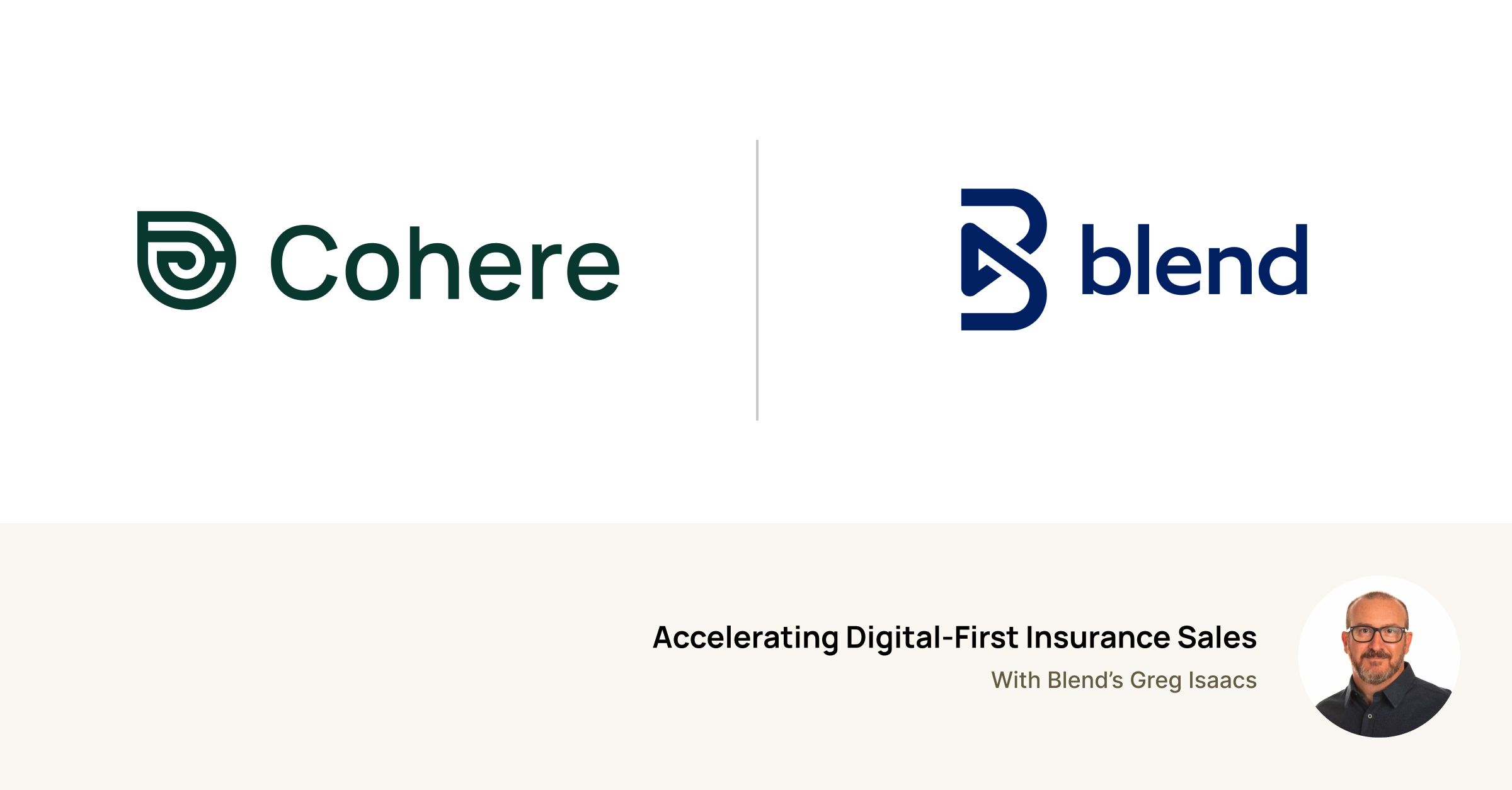 Greg Isaacs is Head of Operations for Homeownership Journey at Blend including Blend Insurance Agency, the insurance division of the cloud-based platform powering consumer-driven banking software for 250+ leading financial institutions, including Wells Fargo and U.S. Bank.

Prior to Blend, he served as COO across various insurance and insurtech ventures, as well as president at CoverHound and CyberPolicy, two digital insurance companies.

We sat down with Greg to dive into his cross-disciplinary expertise, and cover topics including:

"Every quarter, I see more and more customers choosing digital self-service. There’s just no reason you have to sit at an agent’s desk anymore to buy an insurance policy. So I’m a big believer this is where the future of our industry is."

Years prior to joining the Blend team, Greg built and spearheaded a number of companies in the insurance ecosystem.

Most were broadly traditional to the industry, but he recounts having to leverage tech in clever ways — their attempt to generate greater ROI with limited resources.

In retrospect, Greg says, he was actually getting his start by building early, bootstrapped, and relatively successful, insurtech businesses with friends.

These eventually culminated in his time with CoverHound, one of the first digital platforms for personalized insurance in the country.

He led operations there through multiple rounds before exiting, having also scaled across marketing, product, and tech efforts.

Building Your Digital Sales from the Ground Up

That cross-disciplinary approach remained with Greg long after he joined Blend in 2018 as their first employee of Blend Insurance Agency.

The role presented itself after advising the Blend team on how they could operationalize and deliver on the insurance opportunity within mortgage lending from a digital standpoint.

In Greg’s words, he came onto the team to bridge operational and digital efforts, essentially translating between the analog and digital worlds while being able to build from the ground up.

After scaling Blend Insurance Agency to a team of about 100 employees and an annual tens of thousands of policies, he helped lead on a series of products under the Blend umbrella culminating in his current role: leading operations on homeownership journeys.

Again, he identified the common denominator of these teams as being human service-oriented businesses, seated within and driven forward by the digital world.

The Ongoing Trajectory of Digital Insurance

Amid the digital shift occurring in virtually every industry vertical, Greg can trace his digital endeavors back to 1998, when he applied to join the first digital insurance agency in the U.S.

Put simply, in his words, he always believed this is where the industry would end up.

"Ultimately, my work is helping a human service-oriented business exist in a software environment. It’s translating between the two, which operate and scale differently so that two divisions dovetail well into a cohesive organization."

Making customers happy is hard. Let's make it easier.See how Cohere can help your CX and sales teams engage with customers faster and more effectively.

According to Greg, a typical dilemma in insurance sales is a buyer’s hesitation when choosing between pricing, degrees of coverage, reputation, and more within a selection of quotes.

Why Your Sales are Rejected

As for sales that still go south, in Greg’s experience, there are two fundamental reasons why consumers reject your sales efforts, whether that’s through a human salesperson or some form of digital engagement.

And the most successful salespeople address both expertly:

One common roadblock in eComm sales is the consumer’s pre-existing problems, which either block the buyer’s decision-making or cannot be solved by your product.

These issues could be incompatible pricing, a lack of staffing to operate your product (in Cohere’s case, a potential customer who can’t employ live support staffers), or needing to integrate additional channels before they can incorporate your product.

Ultimately, Greg advises sales teams to understand that, for the customer, perception is reality.

Even a problem that’s already been or can be easily solved will still halt the sales process, simply due to the customer’s mental block.

And if all problems have already been addressed and unblocked, Greg would attribute any remaining objections to a simple matter of psychology: the customer’s fear.

By extension, any attempts by a salesperson to redirect a customer’s rejection will only incite further distress, conflict, and distaste for your product.

Conversely, according to Greg, the proficient salesperson will have been able to preemptively identify and address any objections toward the start of the conversation and to explain solutions to those problems.

In his words, as a salesperson, your endgame is to build customer confidence in your product’s potential solution and alleviate any stressors for clear-headed purchasing.

The above approach only becomes more critical when sales are translated to the digital space.

After all, it’s understood that building rapport and addressing user concerns and objections only become more difficult when deprived of face-to-face interaction — a primary reason behind Cohere’s attempt to solve the extreme divide between live and digital support).

And once the user exits the sales call or closes their browser tab, that opportunity is gone.

"Thoughtfully assuaging the customer only becomes more critical in digital sales. Building rapport and addressing objections are much harder when not face to face. And once they decide to exit their browser, that opportunity is gone."

Building Zero to One Sales Culture

As an experienced founder and COO, Greg joined the Blend team with the knowledge that they expected to scale significantly in a relatively short window and approached building a core leadership team accordingly.

He introduced a number of experienced business leaders to the company when there was little-to-no business, with the agreement that core leadership would execute frontline work for at least a year before building out full teams to guide and structure.

Honing in on Culture

As Greg recounts, one of his earliest roles in the insurance industry paid $12 an hour, with the rest varying based on employee productivity.

As such, most sales employees would go to great lengths to keep up numbers for a paycheck that’d cover rent, family expenses, and so on.

This experience continued to influence him in the leadership of Blend Insurance, where he resolved that only the correct motivations would drive successful sales at Blend.

They achieved this by providing all sales team members with a healthy baseline salary that doesn’t necessitate unrealistic production targets or high-pressure sales tactics.

Even more so, employee bonuses aren’t based solely on individual performance but include team-wide success — a structure that’s helped establish an atmosphere of team-wide participation, interdependence, and collective success.

Greg advises any sales leadership to look outside monetary pressure and toward other levers for management and motivation of their team members.

"Money only does so much to motivate your team members. And, fundamentally, we wanted Blend to be a trust-based environment. Instead of a salary that’s 30% base pay and 70% dependent on performance, we choose to do the inverse."

Ready to get started?
Create an account instantly, and supercharge how you help customers. Get started on our free plan with no credit card required.
Get a demo